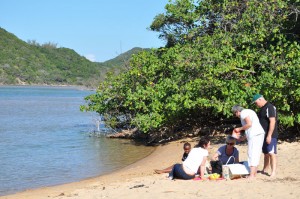 We spent the first week of July 2012 with Ben, Mari and family at the Sodwana Bay Lodge. Great company and a good place to chill out. There’s a lot to see and do within an hour or two’s drive of Sodwana.

Sodwana Bay beach is a magnet for deep sea fishermen and scuba divers. The lodge we stayed at is just outside the national park, which meant we had to pay a daily entrance fee (R210.00 for 7 people) to get to the beach. We’re not used to paying an entrance fee to visit the beach.

Mabibi beach and the Sibaya lake are just 15 kilometers north of the lodge. On a day drive to Mabibi beach, we drove past the lake and stopped at a few viewing spots on the lake shore. We saw hippos, crocodiles, duiker and a variety of bird-life. Mabibi has a wonderful long sandy beach with just about no people about. It’s reached via a boardwalk stairway of 138 steps. Great going down, good exercise coming back. 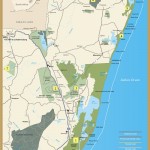 A day was spent at Kosi Bay, with a visit to the fourth lake and the estuary. We didn’t get a chance to snorkel and view the amazing fish, so we’ll just have to go back. The fish kraals in the estuary and first lake are a unique thing, see here.

Then a day at the Hluhluwe Game Reserve, where we saw rhino, buffalo, nyala, giraffe, warthogs, wild dogs, elephant… Not a bad day in Africa!

See a selection of photos from our stay in Sodwana Bay here.

After that we visited a number of friends and family around the country.

Along the way, we popped into the mining town of Cullinan. It is home to the Premier Diamond Mine, also known as the Cullinan Mine following the discovery in 1905 of the largest rough diamond in history. The mine is the third richest diamond producer in South Africa and its functioning open pit is four times larger than the well-known Big Hole in Kimberley. 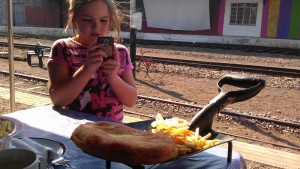 The charming little village  has managed to hold on to much of its mine village character – its historic stone and corrugated iron mine workers’ houses, offices and churches a throwback to the mining times of the early 1900s – lies 30 kilometres east of Pretoria, and is a must on anyone’s itinerary when in this part of the world.

During World War II, Cullinan housed the biggest concentration of Italian Prisoners of War, over 90,000 captured in North Africa.

But the most interesting thing I saw in Cullinan may just be the crockery at “Old Station” restuarant.

Then a most peaceful few days with Daan, Pam and family on a farm near Heilbron in the Free State. I always misjudge the Free State. If you slow down and look around it’s amazing what’s there. The peace refreshed me, body, mind and spirit. See pics here.

We finished off at my parents Diamond Wedding anniversary celebrations in Klerksdorp. The pictures are here.

The peace on this farm was tangible.

Dennis, Chantal and family gathered in Ladysmith on Sunday 22 July 2012 to dedicate Teagan. Here are a few pictures taken on the day…

During the dedication service a number of people shared a word for Teagan. Listen here…

We spent a wonderful week with Ben, Mari and family at Sodwana Bay Lodge during July 2012